Scripture:  “They asked him, “Then who are you? Are you Elijah?” He said, “I am not.” “Are you the Prophet?” He answered, “No.”  Finally they said, “Who are you? Give us an answer to take back to those who sent us. What do you say about yourself?”  John replied in the words of Isaiah the prophet, “I am the voice of one calling in the wilderness, ‘Make straight the way for the Lord.’”  Now the Pharisees who had been sent  questioned him, “Why then do you baptize if you are not the Messiah, nor Elijah, nor the Prophet?”  “I baptize with water,” John replied, “but among you stands one you do not know.  He is the one who comes after me, the straps of whose sandals I am not worthy to untie.”  An argument developed between some of John’s disciples and a certain Jew over the matter of ceremonial washing.  They came to John and said to him, “Rabbi, that man who was with you on the other side of the Jordan—the one you testified about— look, he is baptizing, and everyone is going to him.”  To this John replied, “A person can receive only what is given them from heaven.  You yourselves can testify that I said, ‘I am not the Messiah but am sent ahead of him.’  The bride belongs to the bridegroom. The friend who attends the bridegroom waits and listens for him, and is full of joy when he hears the bridegroom’s voice. That joy is mine, and it is now complete.  He must become greater; I must become less.” John 1:21-26, 3:25-30

I remember it clearly. One day I was riding home from school, sitting toward the back of the bus. I saw about a half dozen kids huddled around, looking at something very intently. My curiosity caused me to glance nonchalantly in their direction multiple times, trying to figure out the object of intrigue. One of them caught my glance and said to me, “It’s a Satanic bible. You want to take a look?” While I cannot say I was a standout Christian influence at that time, I did know that this was probably something I should stay away from and so I politely declined.

Now I cannot tell you how deeply those kids got into it or how serious they became with their newfound “religion,” but I do know they continued to study it and continued to tell me things. It was from them that I learned that, for a Satanist, the greatest holiday was not Halloween, summer solstice, or any other weird bloody ritual, but simply one’s birthday. It was the celebration of one’s self. I have always found that surprising, interesting, and telling. Isn’t selfishness the root of every sin? At some level doesn’t everyone want to be glorified in some way? Isn’t that the first lie that the serpent told Adam and Eve? You too can become like God. You can become great like God. I can go through the Bible and find instance after instance of sins of selfishness committed by God’s people. Cain’s jealousy of Abel, David taking Bathsheba, Peter denying Jesus. In all these instances the actions were done for perceived self-gain. This is what I love about John the Baptist. Multiple times he had followers of him trying to put him up on a pedestal. It would have been so easy for John to accept this glorification of self. However, he constantly used it to point towards Christ.

Finally he responded with, “He must become greater; I must become less.” I believe that is the essence of our Christian walk. Everything we do must be pointing to Christ and away from us. When you have a chance to cheat, you have a choice to make. Will the choice be about your grade or about doing the best with the abilities God has given you? When you have a disagreement with a parent or teacher, will you worry about your rights or let go of your pride and heed the advice/discipline they are giving? When you have a chance to gossip, you can try to make yourself look good or you can use the opportunity to say something kind about someone else.

You see, when you make it about others, you are ultimately making it about Christ. Remember, that is how in the end, God separates out the sheep and the goats. We have one more glorious quarter this school year. Let us use every instance to become less as individuals and CVC community, so He can become greater.

Prayer: Dear Jesus, Please make me a humble servant where I make every day less about myself and more about glorifying you. May we make decisions that are selfless. May we be Kingdom builders instead of self promoters. In Jesus’ name, amen.

About the Author: Matt Fikkert is the husband of Kristi and father of Noah, Silas, and Mia. 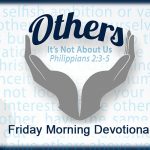