Middle School Leads in Service at the Visalia Rescue Mission

James 2: 8 calls us Christians to take care of others in our community by saying, “This royal law is found in the Scriptures: “Love your neighbor as yourself.”  Central Valley Christian Middle School (CVC MS) is fulfilling this every other Wednesday by sending a homeroom to volunteer at the Visalia Rescue Mission (VRM).

This service experience began eleven years ago when CVC felt they could improve the middle school programs.  Volunteering at the VRM was perfect because so many CVC parents were already supporting the VRM and CVC already had buses for transportation.

It’s important for students to get away from school to see the less fortunate and be aware of the needs in the community.  Being shown that, as Christians, we need to respond to these needs by serving others helps CVC achieve one of its main goals, to shape Christ-like characters in its students.  As a Christian school, we must show outsiders looking in that we are not only concerned with providing prime education but are called to be the hands and feet of Christ.

By helping out at the VRM students are given the opportunity to step out of their comfort zone.  Much of our spiritual growth takes place when we venture outside our comfort zone, which can be difficult when we are constantly surrounded by friends and people we spend most of our time with.

At the Rescue Mission, students spend more time with the outside world and can broaden their vision a bit and see other people.  If you watch them or listen to them long enough you can find it is certainly true that “kids are kind of self-centered at this age,” so it’s a good thing that they can serve someone else every once in a while.

Many would agree that it would be great for the homerooms to visit the Visalia Rescue Mission more often, but it would be difficult because you can only send so many at a time.  It would be awesome if it were possible to serve so often at the VRM that the students could get to know some of their staff personally.

Despite this, some visitors have been able to share their testimonies with students and show them what the VRM is capable of doing in someone’s life.  The students have had their laughs while there by being able to stuff two people into one pair of pants when they were supposed to be folding them.  They have been able to sing praises to the Lord with a man there while serving food like He wants us to.

Students volunteering at the Visalia Rescue Mission have made a great impact on others around them and have allowed them to grow even closer to Jesus Christ our Lord and Savior. 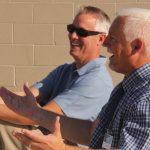 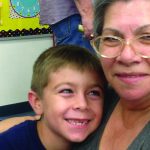 Grandparents Day: A Celebration of FaithfulnessRecent News and Events