Let me tell you what God has done here

In the early afternoon sunshine on Friday, October 17, a little over a thousand people – visiting

parents and grandparents, students, faculty and staff – congregated on the grass on the north

side of the middle school. A long white sheet of butcher paper held up with blue painter’s tape

stretched over the center of the building, the first building ever erected on the CVC campus. The

The mural, conceived and designed by high school art teacher Kevin Langmaack, was the result

of several months of planning and countless hours of diligent and painstaking painting. For

Kevin, it was a labor of love designed to demonstrate God’s faithfulness to CVC over the last

About a year ago, around the beginning of November in 2013, Kevin first began ruminating on

the idea of a mural to tell the story of CVC. When he was asked by Doug and Bernita Vander

Schaaf, chairs of the 35th Anniversary committee, to be a part of the planning process, he

brought his idea along.

backdrop for the mission of CVC.

After the committee decided to move forward with the mural, Kevin spent several weeks

gathering ideas for the design. He wanted to mural to be more than just a representation of the

history of CVC, but also a representation of “God’s leading and God’s work.” He wanted to

that guided CVC through the last thirty-five years.

CVC’s existence, Kevin hid thirty-five doves in the mural design. It is a part of the design that he

is most excited about. Kevin said,

God for what he has done here.”

Doug Vander Schaaf, the middle school principal, describes the purpose of the mural this way:

“I see the mural as something the Bible depicts as standing stones, a marker you raise up to tell

If you have not seen the mural for yourself, visit it on the north side of the middle school

building. There, on CVC’s original building, completed so many years ago by faithful volunteers,

(The New International Version, Col. 2:7) for God’s faithfulness to CVC. 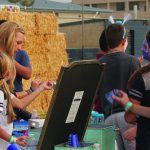