Cavalier Feature: The Spice of Life

Add a hint of this and a pinch of that. Mix in a few mystery ingredients (awkwardness, self-confidence, nostalgia, and the latest feel-good music hits) and you have the Annual Central Valley Christian Middle School Variety Show.

The show began humbly in the high school south gym the spring 1996 before a small crowd of fellow students, and has grown in more recent years to a large event, complete with a pre-show “fiesta” or meal of sorts to help raise money.

And–why is the Variety Show such a legendary event? It shows off the talents to a broad audience that may not typically get to see such comedic timing, vocal capabilities, and choreographed awesomeness in action.

This year, past CVCMS students (that is, current CVCHS students) joined MS staff in a surprising flash mob, thanks to en plein air staging, an optimistic Dream Team (that’s what the CVCMS staff call themselves) and a fair amount of secret rehearsals.

More than the opportunity to be outrageous or silly, the Variety Show gives kids a chance to be kids, especially those kids that may not excel in athletics or academics. It’s a different kind of setting where overacting, hilarity, puns, and prowess (of the musical persuasion) are valued and applauded, or maybe even just noticed for the first time. The encouragement of a live audience of peers, parents and mentors makes for the perfect moment to reveal that astonishing talent the middle schooler may have been keeping to themselves–until now!

Middle Schoolers Talk About the Magic

“We got to start off the show with a flash mob. It started with a few people dancing by themselves and led to the whole Middle School dancing. It was AWESOME! It got everyone hyped about the show, and we were all rea

dy to have a great night! I really enjoyed giving people a show they could enjoy, being with my friends and having an event that felt normal. I enjoyed the whole process, from the rehearsals to the show. It was all so much fun. It got our minds off of work and let us be creative and fun. I loved it ALL!” – Kamryn Westra

“The variety show really brought the community together. Everyone had a good laugh.” – William Schaap

“It was great to see a lot of the middle schoolers come together and have a ton of fun while building relationships with each other through encouragement backstage.” – Chloe Van Dyk

What year did it start?
The first show was in the spring of 1996, and it took place in the south gym in front of mostly a group of students.

Why did it start?
Great question.  I don’t recall exactly the genesis behind it, but I know that we had a student mixer planned for an evening and wanted something more organized to do with them, so we invited kids to perform.  Only a few did that year, in addition to the four male MS teachers acting as the Supremes to our boss’s (Catherine Hiatt) Diana Ross in a rendition of “Stop in the Name of Love.”

How much time does it take to put together, and how much money do you typically raise?
It’s usually about a two-month process from auditions in February/early March to opening curtain about mid-April. It’s only in the last few years that we’ve started a before-show fundraising dinner, and we usually make about $2000 on average.

What is the most memorable variety show act or moment you can recall?
There are so, so many to choose from, but one that is fresh in my mind now is from 4 years ago when the current graduates were 8th graders. Because there were double the number of girls in that class, an act evolved in which Mr. Wojczynski opened a shop called Wojo’s Dojo in order to teach the boys how to flirt with girls, and the act just kept going at the end, with a group of HS boys making a cameo appearance, followed by a group of dads of 8th grade girls coming on stage and shaking their heads at the thought of their daughters dating.

Why do you think the Variety Show is important to continue? What kind of positive things does it bring to the rambunctious life of the middle school?
There are two things that I love about the show and that bring it value.  First, it’s an enterprise that gets so many kids involved, it’s a true community activity.  That aspect of so many people working together is priceless.  Second, for a lot of these kids, it’s the first time in their lives in which they’re a part of something that is so much bigger than themselves.  The dynamic is huge and intriguing.

Do you wish your students relished going to school to participate in activities and be encouraged and mentored by their teachers? Do you have a deep hope to partner with a school to bring the joy of Christ to your children? Apply today! 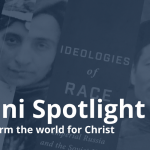