Though Tulare County might never be mistaken for Paris or New York City or other cultural meccas of the world, it does boast one educational claim to fame. Outside of the Scripps National Spelling Bee in Washington, D.C., it hosts the country’s largest spelling bee in existence. Each February the Visalia-Times Delta and the Tulare County Office of Education partner together to put on the annual spelling championship, inviting nearly 250 school champion spellers from the different educational institutions in Tulare County to the Visalia Convention Center for the spelling extravaganza. In addition to prestige and fame, the spellers battle nerves to vie for the ultimate first-place prize: a trip to Washington, D.C. for the national competition.

For the past sixteen years, CVC has sent 2 spellers to the bee, a 4th-6th grade school champ as well as a 7th-8th winner. This year featured a distinct déjà vu theme as 2014 CVC winners Anna Walhof (5th grade) and Samuel Lopes (8th grade) repeated as school champions in 2015 and reprised their roles as country bee representatives. On February 25 the two converged at the competition along with 243 linguistic brethren and stepped up to the microphone.

To get a feel for the atmosphere at the county bee, imagine the cavernous convention center ballroom filled with a thousand interested observers. The clenched fists, the sweaty palms, the pained facial expressions and the palpable nerves . . . of the parents in the audience simply mirror the magnified tension wrenching through the students’ insides on stage. Showing poise beyond their years, the kids attempt to spell words straight out of the Department of the Lexically Obscure, words such as “picaresque” (a form of prose fiction originally developed in Spain) or “tritium” (an isotope of hydrogen).

Samuel and Anna represented CVC with poise and grace, each breezing through the first round with their spellings of “canasta” and “rotunda” respectively. In round two the words became more complex, requiring a degree of pronunciational skill reserved for MENSA members and seasoned wordsmiths. Samuel correctly spelled “cacophony”, but Anna fell prey to the blitzkrieg of German word “Weissnichtwo,” which is “an indefinite, unknown or imaginary place,” originally made up as a fictional city in Thomas Carlyle’s novel Sartor Resartus. Anna finished in a tie for 48th place and earned a tee-shirt and a medal for her efforts.

Samuel kept the spelling vibe flowing, correctly spelling “alamo,” “vivisection,” “argentine,” and “pochismo” in rounds 3-6 before missing on “cringle” in round 7. He left the competition clutching a Merriam-Webster Collegiate dictionary, a bee t-shirt, a commemorative medallion and the satisfaction of finishing in a tie for 7th place.

Congratulations to both Anna and Samuel for competing in the country championship and for representing CVC so well. 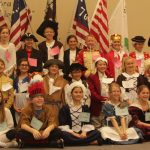 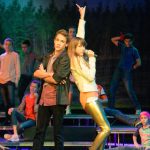